Calling all history buffs and fans of random trivia! Archaeologists in northern France, near the city of Le Chene, have made quite a surprising find that has sparked curiosity among dentists and historians alike. Read on to learn about the oldest dental implant ever discovered in western Europe.

The remains of a young woman believed to have lived around 2,300 years ago were uncovered in a well-furnished wooden burial chamber. Although the rest of her body was poorly preserved, her mouth contains 31 anatomically correct natural teeth and a piece of iron fashioned into a false tooth where a missing upper incisor tooth would have been.

Experts believe that the decreased woman’s iron dental implant was hammered into her pulp canal after her death in order to ensure a pleasing appearance during her burial. This wouldn’t have been a completely odd practice, since there are several known cases of prosthetic teeth being implanted after death for esthetic reasons. Due to the rudimentary knowledge of pain relief, sedation, and anesthesia at the time, a living person wouldn’t have been able to endure the implantation procedure without being in excruciating and unbearable pain. Moreover, even if she had survived the procedure, it is highly likely that the iron would have led to a life-threatening infection since it corrodes inside the body. 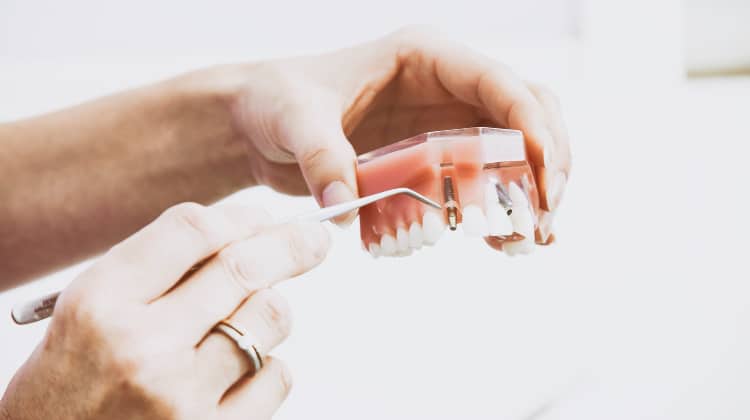 Restore Your Smile with Dental Implants!

When archaeologists make dental discoveries, like finding the oldest dental implant, it becomes even more clear and fascinating just how extensively ancient humans practiced dental surgery, in many wild forms, since at least 7000 B.C. Fortunately, Arizona Biltmore Dentistry utilizes modern dental procedures to safely restore the appearance and function of your smile. Are you interested in learning more about our natural-looking dental implants that are safe, comfortable, and functional? Contact us to schedule your consultation with our expert team.